Part 1 described the hardware portion of this project. TL;DR: the existing microprocessor was replaced with an Arduino.

A couple of hardware modifications have been made since part 1 was written:

For the software it was decided to emulate an iRobot Create 2. This has a documented API (iRobot Create 2 Open Interface) so all design decisions have already been made. Also, because this is a popular platform, third party software exists to directly control the robot and a driver for ROS integration is available.

Not all of the Open Interface commands were implemented, just those required for motor control, odometry and common sensors. The source code can be extended as needed. Some constants may need changing.

The code is straight forward in operation:

To verify compatibility the code was tested with the following:

I needed a robot platform for a project and bought a Vileda A3 cleaning robot cheaply from ebay, advertised as not working but a new battery fixed that! (Battery for Vileda M-488a fits this A3 model) 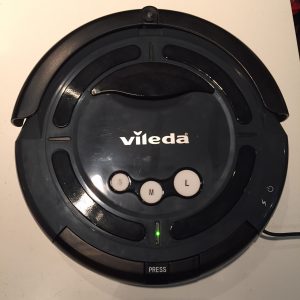 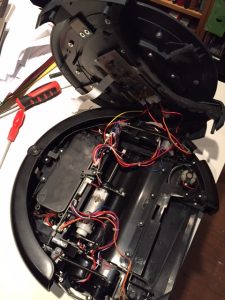 we find the expected motors for the wheels, fan, main brush and edge brush. The wheels are equipped with optical encoders. Other sensors include the left and right bumpers, wheel drop switches and cliff detectors. The top lid holds three buttons and a red and green LED. There is a 360 IR reflector installed but this is not populated with a detector.

There is a self-contained NiMH battery charger board under the top lid: 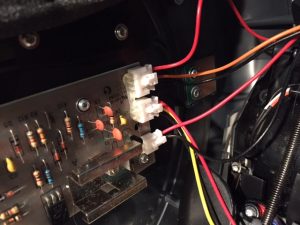 After a bit of reverse engineering I came up with the following PCB pin assignments:

I didn’t need the cliff sensors so didn’t trace those out.

The motor driver chip is an Allegro A4954 dual 2A/40V h-bridge. Current limit is pre-set. Pins IN1-IN4 of this chip are routed to the microcontroller.

Not much room around the PCB in-situ so I removed the microcontroller, soldered flying leads directly to the PCB and routed them to the indicated arduino pins. I wanted to keep the Rx/Tx pins free so only had 18 pins to play with. It should be possible to multiplex some inputs if needed in the future. Here is the hacked board under test: 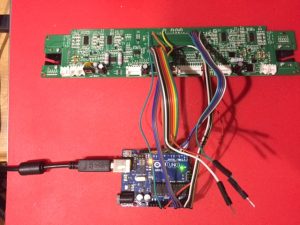 and here it is embedded back in the robot:

The PCB is a tight fit and once the main brush motor is removed there is just enough space for the Arduino to sit in its place.

A simple program was written to exercise the main features. Here is a short video showing the response to bumpers and a quick demo routine that cycles through the LEDs, plays a tune and does a little dance.