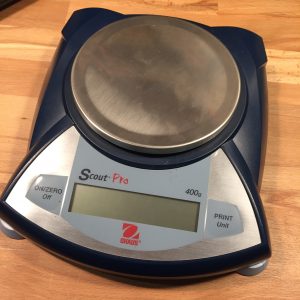 This balance takes a proprietary USB or RS232 adaptor which plugs into a 2×6-way edge connector on the PCB, but as an adaptor costs more than the balance cost on eBay it was decided to hack it. 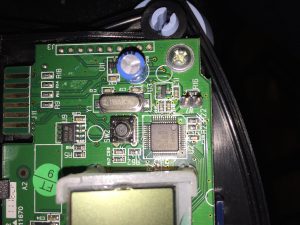 Tracing out the edge connector pins on the balance PCB to the NXP LPC2103 micro-controller revealed the following circuit fragment: 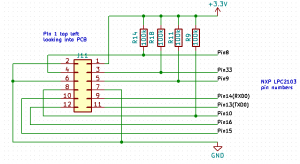 An extra menu item only appears on the balance’s display when a serial adaptor is plugged in, so a reasonable guess was that the lines with pull-up resistors are pulled low in some combination by the adaptor to enable the unit to recognise it. And indeed after some experimentation it was found that starting the unit up with pin 8 grounded adds the Print and USB options to the menu. Grounding pin 33 on startup adds Print and RS232 items.

The idea was to use an ESP8266 module to send and receive serial data from the balance to an MQTT topic. The edge connector has a 3.3V pin available, however the balance powers off if more than about 100 mA current is drawn. This was not enough to power the ESP8266 so a mini-buck regulator was used and fed directly from the 12V input jack. 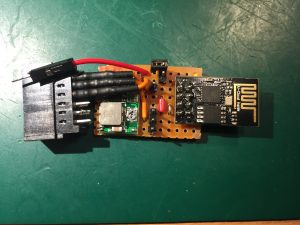 A simple program to send/receive any serial traffic to an MQTT topic was downloaded to the ESP8266. Commands can be sent to/from the balance by publishing/subscribing to the “ohaus” topic.